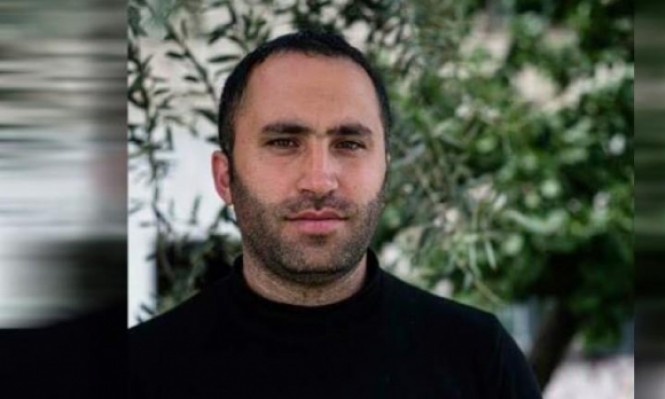 Issa Amr told lawyers for justice that what he wrote does not affect, or harm, nor infringe on the Palestinian security service pointed out that he has the right to express his opinion freely and other publications on social networking sites.

Issa Amro said: “Preventive security forces raided my house on Sunday night, the day before I was arrested,” and I was not at home at that time, I was in the neighborhood of Tel Rumeida, which is threatened by settlement. “ Added to that “They left me a summons to come on Monday morning for the purpose of an interview. I went to the “interview” then I stayed there until evening, then I was told that I was being detained, in the preventive headquarters in Hebron. ”

Issa Amro considered the post he wrote as a personal opinion expressing, in which he said “in a journalist with threats from members of the security services against the background of publishing news of the arrest of Ayman al-Qawasmeh, “I wish that every journalist in the country publishes the news because it is 100 percent true and not a rumor, and secondly everyone who was being threaten tell me so we can document for the Europeans and show them how they violate the international law, not everyone should act as a law or a state. The law is clear and unequivocal, the detained journalist Ayman Qawasmeh, there is a district, a society, journalists’ union, and activists who will stop with him, the security men are enforcing laws and regulations. ” Freedom to Ayman Al – Qawasmi.”

The decision of Law No. (16) On Cybercrime contains serious provisions that would violate and unjustifiably restrict a range of citizens’ rights and fundamental freedoms, especially their right to freedom of opinion and expression, and their right to privacy is guaranteed by the amended Basic Law, the Declaration of Palestinian Independence and the international human rights conventions to which the State of Palestine is a party. (16, 20, 28, 51), as well as articles (32, 33, 34, 35, 37 -40, 41, 42, 43, 44), these include many provisions that would prejudice the right to privacy and the privacy of citizens’ by living without providing any legal controls, and the most important is judicial authorization, and notifying the accused of these procedures. Under this law, ‘Issa’ Amro was arrested several times from the occupation for his previous work as a researcher at B’Tselem, which is an Israeli non-governmental organization active in documenting human rights violations in the occupied territories, and this reinforced the Palestinian security apparatus by arresting him for his previous activities and writings, which are considered freedom of opinion.